Peter Apo is an accomplished songwriter and singer.  He is a native Hawaiian who left the islands in the late 50’s to attend the University of Oregon.  He spent the sixties in a folk band, The Travelers 3, beginning on the campus of the University of Oregon. As a musical product of the era, Peter was immersed in the pop culture that spawned a vibrant new generation of songwriters and performers.  They expressed themselves fearlessly and truthfully about the conditions of an emerging American society. As a folk musician with the band The Travelers Three Peter toured the nation’s colleges, coffee houses, hotel showrooms, and Nevada casinos.  The Travelers Three recorded 3 albums for the Elektra label and one for Capitol Records.

He returned to the islands in 1975and dedicated the next 30 years of his life to  public service as a state legislator, Office of Hawaiian Affairs Trustee, government administrator for the State of Hawai’i and the City of Honolulu, and then as a business consultant in the Hawai’i hospitality industry.  Peter has now come full circle and has returned to his highest passion – folk music. He characterizes his return to folk music as going “back to my future”.

With an emphasis on folk music Peter’s performances include generous helpings of Hawaiian, pop standards, and originals.  He performs as a soloist but his favorite manifestation is -The Peter Apo Band – with 3 other outstanding musicians, Gordon Freitas, Jim Christian, and Pete Moe. 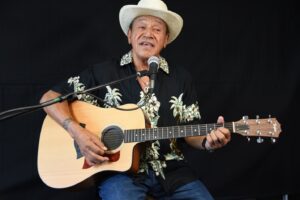 The Peter Apo Band at the Blue Note